On the Birth of Christ

On the Birth of Christ - Commentary on the Nativity Gospels

by Archbishop Averky
Only two of the Evangelists tell us about the birth of Christ and the events surrounding it: St. Matthew and St. Luke. St. Matthew informs us concerning the revelation of the mystery of the Incarnation to the righteous Joseph, the adoration of the wise men, the flight of the Holy Family to Egypt and the slaughter of the Bethlehem infants. St. Luke describes in greater detail the circumstances in which Christ the Saviour was born in Bethlehem and the adoration of the shepherds.
The Revelation of the Mystery of the Incarnation to the Righteous Joseph (Matt. 1:18-25)
St. Matthew relates that soon after the betrothal of the Most Holy Virgin Mary to the aged Joseph, "before they came together," that is, before the final conclusion of an actual marriage between them, it became clear to Joseph that Mary was found to be with child. Being a righteous man, that is on the one hand just and on the other merciful, Joseph did not wish to reveal before everyone her supposed sin, so as not to subject her to the shameful and cruel death accorded by the law of Moses (Deut. 22:23-2&). Instead, he decided to secretly release her from the betrothal without making known the reason for it. While he was thinking about this, an angel of the Lord appeared t o him and explained that He Who was to be born was "of the Holy Spirit," and not the fruit of sin, as he mistakenly assumed. "And she shall bring forth a Son," continued the angel, "and thou shalt call His name JESUS: for He shall save His people from their sins."
In Hebrew the name "Jesus" is "Yeshua" and means "Saviour", In order that Joseph not doubt the veracity of his words, the angel quoted the ancient prophecy of Isaiah which testifies that this great miracle or a seedless conception and the birth from a virgin of the Saviour of the world, was foreordained in the pre-eternal counsel of God: "A virgin shall conceive, and bear a son" (Is. 7:l4). This is not to say that the prophecy was not fulfilled if the prophet said that "He shall be called Emmanuel," and He Who was born of the Virgin was called Jesus. The name "Emmanuel" is not a proper name, but only symbolic. "Emmanuel" means "God is with us." Thus, when this miraculous birth of the Child from the Virgin took place, the people would say: "God is with us," for in Him God came down to earth and began to live among men. This was merely a prophetic indication of Christ's divinity, an indication that this miraculously conceived Infant would be not an ordinary man, but God. Convinced by the angel's words, Joseph "took unto him his wife," that is, he renounced his intention to put her away from himself and left her to live in his home as a wife.

(translated from Archbishop Averky's Handbook to the Study of the Sacred Writings of the New Testament, Jordanville, 1974)
http://www.roca.org/OA/25/25c.htm 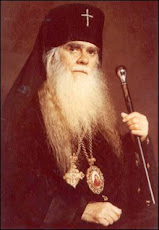